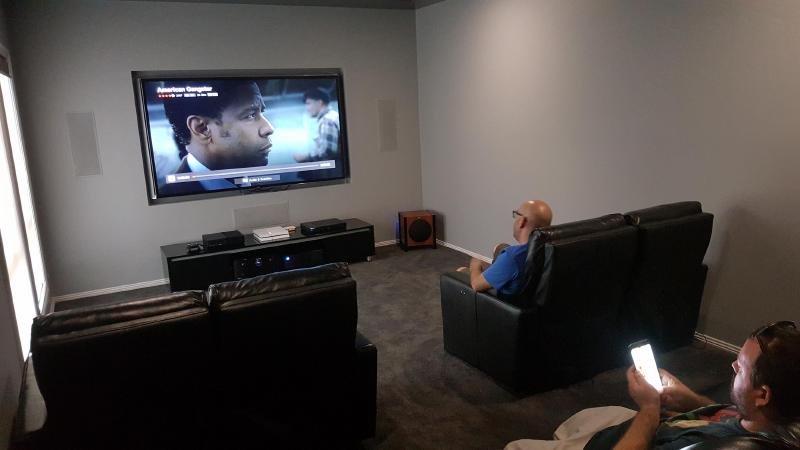 Location: Lightsview
Budget: $5000-$10000
Installation Time: 3 weeks
Description
Pat called me to come and look at an existing wall mounted TV he had, he wanted to incorporate some new in wall speakers that he had already purchased. The speakers were Paradigm Reference series in wall speakers. The speakers come with a prefabricated backing box to help produce a better sound. We needed to get the speakers on the wall and have it done neatly and professionally as Pat wanted to eventually turn the room into a dedicated home theatre..
Equipment:
Paradigm Reference in wall speakers front and rear
Marantz SR7005 home theatre receiver
Rotel power amp
REL 10″ powered subwoofer
Sony Playstation 4
Xbox One
LG 85″ TV
Marantz Blu Ray
Immediately we had an issue with the in wall speakers Pat had selected as the backing box should have been installed whilst the frame was going up, in this case the property had a steel frame so this left us with few options. After a couple of discussions with Pat and providing some examples of our previous work, we came up with a solution. We agreed we would build out the existing wall where the TV was mounted, we would then install the in wall speakers within this false section of wall, at the same time we would recess the TV so it would sit flush with the new wall.
Eventually we will be installing a home theatre projector in this room and motorised drop down screen, so having the TV recessed has helped with this. We were extremely particular with this installation as we knew when it was finished it had to look amazing, and really provide a home theatre feel to the room. Once the wall was finished and the TV was re installed on the original bracket that LG had installed we noticed the TV was out of level by 3mm at one end, We took it off and adjusted the TV, so it is perfectly level to the ground, as well as flush to the front face of the new wall.
As you can see the walls have had a coat of paint to really bring the home theatre feel to the room and once the screen and projector has been installed it will be a truly great room. The Paradigm in wall speakers and REL sub make a perfect combination and really provide a clean natural sound like you would expect from traditional floorstanding speakers.